Is the legal community ready to celebrate pricing? Probably not, but I am declaring October 22nd to be Law Firm Pricing Day. 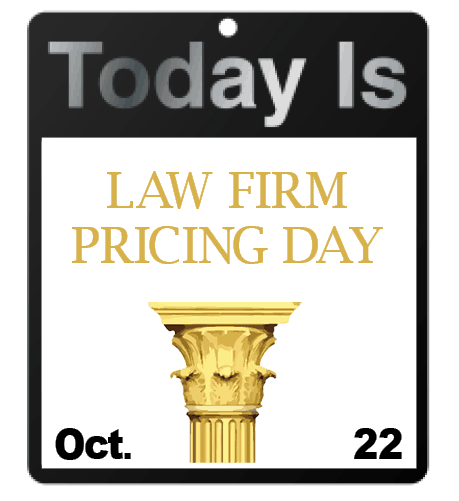 Why today? There are plenty of other milestones to celebrate on this date in history: founding of Princeton University (1746), opening of the Metropolitan Opera House (1883), the Supreme’s first No. 1 album (1966).

On this date more than twenty years ago — October 22, 1993 — The New York Times declared, “Revolution in Lawyers’ Fees: The Meter is Being Shut Off.” It was the first time a major media outlet discussed law firm pricing in the public sphere. (In fact, based upon my research, the next journalistic piece does not appear until 1997.)

To kick-off the celebration, I have included the NYT article, written by Margot Slade, at the end of this post. (It also can be found in my Law Firm Pricing Library of articles.)

I hope this exercise will help us all avoid George Santayana’s warning: “Those who cannot remember the past are doomed to repeat it.” I am equally hopeful that it cannot be said of us in another twenty-one years (quoting Frederick Krebs, former president of the Association of Corporate Counsel, paraphrasing Winston Churchill): “Never has so little been accomplished by so many for so long.”

Revolution in Lawyers’ Fees: The Meter is Being Shut Off by Margot Slade
(originally printed October 22, 1993, The New York Times, p. B7)

It has been the bedrock of the lawyer-client relationship for decades: the billable hour. Lawyers have charged for their services by the hour, many with little inhibition about the number of hours accumulated, and clients have paid, often without a second thought.

But now the ground is shifting in response to increased competition among law firms and to diminished revenue among law firms and clients alike. And that shift, particularly in corporate law, has begun to bury the hourly rate. Cost-cutting alternative billing schemes are on the rise, and in some cases firms are even being forced to bid for corporate business.

The tremors of this change, first felt a few years ago, are now rippling through law firms from coast to coast.

Fixed, Capped or Contingent
“Clients are talking about fixed fees, capped fees, fee estimates, contingent fees and discounts,” said Blane R. Prescott, a partner with Hildebrandt, a management consulting company based in Somerville, N.J. “They want to see a budget, something that will give them a better idea in advance of what a law firm’s services will cost. They want to discuss that budget and how it was developed.”

Given a glut of lawyers and a dearth of clients, Mr. Prescott said, “clients are getting what they want.”

Others who monitor the legal profession agree. Although there is no comprehensive national survey to buttress their view or to document the extent of savings for clients, “anecdotal evidence and our own recent, small-scale survey confirm the trend that we perceived: law firms increasingly moving to alternative billing approaches at clients’ request,” said Richard C. Reed, who is a consultant at Altman Weil Pensa, a Philadelphia-based legal management consulting firm, as well as chairman of the American Bar Association’s alternative billing task force.

Those alternatives are a central element of an accelerating revolution, driven mostly by clients, in the way the nation’s law firms do business. It is, industry analysts say, a cultural revolution that puts a premium on serving clients, not racking up hours, and on producing quality work, as clients define it: work that places an emphasis on timely performance, efficiency, risk-sharing between the firm and its clients, and the firm’s willingness to discuss how cost estimates were arrived at.

Although the revolution is being powered by the muscle of corporations — those Goliaths of law firm clientele — some benefits are trickling down to David as well. Particularly in estates, trusts and other areas of family law, where the preparation of documents is increasingly automated, individual clients can frequently obtain services for a fixed fee.

Performance Criteria Change
To clients, the sea change promises value for money. To law firms, it underscores efficiency as a requisite of long-term client relationships. And to individual lawyers within those firms, it brings a shift in performance standards.

In firms that embrace the new approach, partners are rewarded for their marketing and management abilities, “especially for their talent in pricing legal services and supervising legal projects,” said Ward Bower, a principal at Altman Weil Pensa. And associates, he said, are “judged on how effectively and efficiently they serve clients, as against how many hours they record.”

One benefit of all this is that an associate who is trying to balance family and career, for example, can be judged on something other than hours billed, said Peter D. Zeughauser, vice president and general counsel of the Irvine Company, a real estate development concern in Newport Beach, Calif.

The “down side,” Mr. Bower said, is that as law firms turn leaner, they will need fewer lawyers; in the wake of vast numbers of layoffs that have already resulted from a weak economy, even more associates may be finding themselves out of jobs.

“Our object is to procure the right quality of legal services in the most cost-effective way,” said David Grimes, vice president and director of administration in the legal department of the Bank of America. “And by ‘quality’ we refer to a law firm’s ability to establish a relationship with us, to know us and the risks we are willing to take in any document or transaction, its willingness to work with our in-house staff and to work within a budget.”

And what of firms that demur? “Frankly,” Mr. Grimes said, “we don’t use them.”

It was not always that way. Law firms long dictated the quantity, the quality and the price of legal service, and the price that many of them set was high: most recently as much as $500 or even $600 an hour.

The price had to be high, in order to cover the overhead generated by expansionist policies of the 1970’s and 80’s. To meet a swelling demand for their services, firms had gone on spending sprees, bringing in so-called “rainmakers” (partners with a knack for luring clients), hiring new associates, investing in technology and expanding not only into larger offices but also into other cities.

As their cost of doing business rose, firms compensated by increasing their billing rates and their hours, often by throwing hordes of young associates at a project and charging for the time of each. The legal industry called this “leveraging”; clients frequently called it overstaffing.

“Two things were central to making money then: how many hours you produced and how many people you could employ,” said William C. Cobb, president of Houston-based W.C.C.I. Consultants, which specializes in strategic issues facing the legal industry.

Effect of Recession
But law firm control of the legal services market was doomed, and, as a consequence, so was the unchallenged pre-eminence of the billable hour. By the late 1980’s, the supply of lawyers was up but the amount of their business down, a result of a nagging recession and corporate clients’ cost-cutting, especially through the increased use of in-house legal departments.

It was a buyer’s market, and the buyers were balking at what they considered overstaffing of cases and high hourly fees.

In addition, some law firms hit up against what Mr. Reed, the A.B.A. task force chairman, calls the “productivity paradox.”

“The advent of advanced technology, such as computers, minimized the number of human hours needed to generate legal work,” he said. “Lawyers realized that if they charged only by the hour, they would earn less.”

With revenue down, costs up and their profit margins squeezed, an increasing number of law firms have been developing alternative billing strategies. “And they are using market-based pricing — based on the value a client is likely to place on a particular service — rather than the time-and-materials approach of cost-plus pricing,” said Mr. Bower, the Altman Weil executive.

What clients value, he said, are efficiency, on-time delivery, predictability of expenses and pricing that is competitive, even if that does not necessarily mean inexpensive. “There are, for example, ‘you bet your corporation’ cases,” Mr. Bower said, “in which the situation is so severe that the client doesn’t care what the legal work costs; all that matters is winning.”

“In this sense, legal services are like health services,” said Robert C. Buenger, marketing director at Bryan Cave, a St. Louis-based law firm with a diversified corporate practice. “Everyone wants managed health care to contain costs, until they get sick. Then they want the best care, regardless of costs.”

Sharing the Risk
Even these clients, however, may want to spread the risk of cost overruns and bad outcomes, Mr. Zeughauser said.

“Law firms are notoriously poor at forecasting how much it will cost to accomplish a particular task; they generally low-ball it,” he said. “Capping fees and refusing to pay over a certain amount shifts that risk to the firm. Law firms are also bad at predicting the likelihood of a bad outcome, especially in litigation. Relying on a contingent fee, in which the lawyers profit from a good outcome and share in a bad one, shifts that risk, too.”

To further contain legal costs, Mr. Zeughauser said, his company has forced competition for its business. “We’ve gone from one law firm, which supplied 90 percent of our legal services, to 35 firms,” he said. “We’ve even invited law firms to submit bids on particular business.” The result, he said, has been a saving of 25 to 75 percent in costs, depending on the given service.

No matter what alternative strategies they pursue, “what law firms should not do, if they want to survive, is play the part of the old buffalo hunters,” said Mr. Cobb, the W.C.C.I. president. “When buffalo become scarce, buffalo hunters can come up with a better way of hunting, they can hunt something else, or they can nurture the buffalo they have. Buffalo hunters cannot sit in bars waiting for the buffalo to return on their own. They won’t.”

QUESTION: Indicate your level of activity with respect to alternative billing:
Developing upon client request or demand — 43%
Actively developing — 30%
Not pursuing — 23%
No response — 5%
Figures do not add to 100 because of rounding.